The town of Amboise, with the French and Italian presidents, kicked off the celebrations marking the 500th anniversary of Leonardo da Vinci’s death ,.
In fact, the Florentine master who personified the Italian Renaissance was the guest of France’s King Francis I for the final three years of his life before his death in Amboise in 1519.
In this year of Leonardo’s celebrations, the Dutch international academic publisher, Brill, established in 1683 in Leiden, Netherlands, is going to publish on 27 June 2019 the second volume of Leonardo Studies. 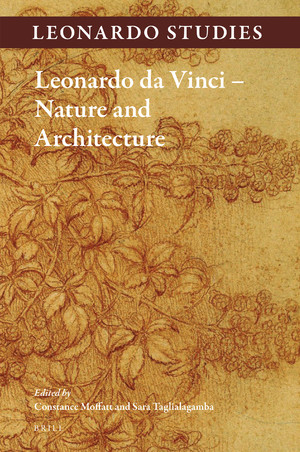 The volume hosts a dual theme of nature and architecture, offering a wide-ranging overview of current Leonardo scholarship on these two abundant subjects. The most innovative aspect of Leonardo’s contribution to technology was his analysis of the understanding the physical properties of nature which must precede individual projects of painting or designing buildings. The volume begins with the Trattato, and follows with physics, geology, painting that imitates architectural structure and vice-versa. The volume continues with architectural projects, questions of attribution, urban planning, and the dissemination of Leonardo’s writings in the Trattato and its historiography. The volume contains a remarkable group of articles and represents not only new research, but also a starting point for future studies on these topics.
The coordinators of the volume are Constance Moffatt, Ph.D. (1992), UCLA. Professor Emeritus of Art History, Los Angeles Pierce College. And Sara Taglialagamba, Ph.D. (2010), Siena University, is Co-Director of the Rossana & Carlo Pedretti Foundation and a Post PhD at EPHE at Sorbonne (Paris). Contributors are: Janis Bell, Andrea Bernardoni, Marco Carpiceci, Paolo Cavagnero, Fabio Colonnese, Kay Etheridge, Diane Ghirardo, Claudio Giorgione, Domenico Laurenza, Catherine Lucheck, Silvio Mara, Jill Pederson, Richard Schofield, Sara Taglialagamba, Cristiano Tessari, Marco Versiero, and Raffaella Zama See Less
The book contains the following chapters:

Part 1
Natural Properties and Nature
1 The Treatise on Painting as a Guide to Nature: Light and Color
Janis Bell
2 Experimenting and Measuring Natural Powers: a Preliminary Study on Leonardo’s Ways to Quantify the Intensity of Percussion
Andrea Bernardoni
3 The Weight of Water
Paolo Cavagnero
4 Leonardo and the Whale
Kay Etheridge
5 Geology and Anatomy in the Sixteenth–Nineteenth Centuries: Some Suggestions towards a Comparative Analysis
Domenico Laurenza
6 Leonardo’s Brambles and Their Afterlife in Rubens’s Studies of Nature
Catherine H. Lusheck
7 “Under the Shade of the Mulberry Tree”: Reconstructing Nature in Leonardo’s Sala delle Asse
Jill Pederson