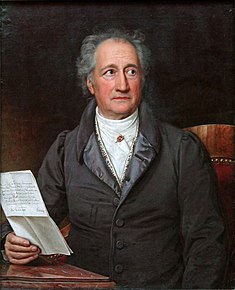 In West-East Divan (1819), Germany’s greatest poet J. W. von Goethe presented a work of eternal fascination. Inspired by the Divan (“Collection”) by medieval poet Khwāja Shams-ud-Dīn Muḥammad Ḥāfeẓ-e Shīrāzī known by his pen name Hafez, Goethe combined his own identity with that of the Persian Sufi master who sang the delights of wine and tavern romance in a context of Qur’anic allusion. Ḥāfeẓ was the only one to whom Goethe dedicated an entire book. In his Zwillingsbruder he had discovered a poet whose inspiration stimulated in him a feeling of regeneration. In many poems he employed a “signature verse” (taḵallosá) typical of the ḡazal, in which he identifies with the Persian poet (see, e.g., 1998b,: “Und mit diesem Lied und Wendung/Sind wir wieder bei Hafisen”). In the Buch des Sängers and the Buch Hafis, where Ḥāfeẓ’s name is most often mentioned, motifs and characters from the latter’s poetry form the Persian mask of the Divan.
In his Noten und Abhandlungen Goethe paid tribute to some other Persian poets: Ferdowsi, Anwari, Rumi, Saʿdi, and Jāmi and Neẓāmi (Goethe, 1998a, pp. 153-60). It’s interesting to know something more about Neẓāmi or Seyed Ali Sayyid Mohammed oglu Imamaddin Nasimi, who was born in 1369 in Shemakha, Azerbaijan. He was known also by the name “Imadaddin Nasimi”. Johann Wolfgang von Goethe wrote about Neẓāmi and his work:
“A gentle, highly gifted spirit, who, when Ferdowsi had completed the collected heroic traditions, chose for the material of his poems the sweetest encounters of the deepest love. Majnun and Layli, Khosrow and Shirin, lovers he presented; meant for one another by premonition, destiny, nature, habit, inclination, passion staunchly devoted to each other; but divided by mad ideas, stubbornness, chance, necessity, and force, then miraculously reunited, yet in the end again in one way or another torn apart and separated from each other”.
There is little information about the life of Neẓāmi. Most sources call him Imadaddin, but there are sources that mention the real name of the poet Ali or Omar. Many researchers claim that he was born in Shemakha, others in Bursa, Diyarbakir (Turkey), Tabriz, Shiraz (Iran) and Baku (Azerbaijan).
In the middle of the 14th century, Shemakha was one of the largest cultural centers. Here there were many schools, madrasas, poetry and music collections, known throughout the East, and there were also rich public and private libraries. This milieu influenced the evolution of the poet as a prose writer and thinker. He deeply learned classical Eastern and Ancient Greek philosophy, as well as literature, knew the basics of Islam and Christianity well, mastered such sciences as medicine, astronomy and astrology, mathematics and logic. He learned languages so well that he could equally write beautiful poems in Azerbaijani, Persian and Arabic. The language of his poems in the Azerbaijani is rich and close to popular speech. After receiving education in the relevant sciences from prominent thinkers of his period, Nasimi came to the services of Hurufi Fazlullah Naimi, fed on his education and training. In all his trips, he was the travelling companion of his sheikh, the leader Naimi, and married his daughter.
The poet fought for the happiness of mankind, world peace and the equal rights of people through his skillful pen. The master, who advanced the concept of “perfect person” in poetry, was persecuted by the Black Hundreds of his time because of his advanced life ideas.
While the Hurufits were subjected to strong pressure by Temujin, Nasimi was expelled from his homeland and had to live in Iraq, Turkey and Syria. Nasimi was executed in Aleppo in 1417 because of the pantheistic ideas that he put forward on the basis of the teachings of Hurufism.
Nasimi’s collected poems, or dîvân, number about 300, and include ghazals, qasidas (“lyrics”), and rubâ’îs (“quatrains”) in Azerbaijani Turkic, Persian, and Arabic. His Turkic Divan is considered his most important work, contains 250–300 ghazals and more than 150 rubâ’îs. A large body of Bektashi and Alevi poetry is also attributed to Nasimi, principally as a consequence of Hurûfî ideas’ influence upon those two groups. Shah Ismail I, the founder of Safavid dynasty in Iran, who himself composed a divan in Azerbaijani Turkic under the pen name of Khatai, praised Nesimi in his poems.

One of Nesîmî’s most famous poems is the gazel beginning with the following lines:

Both worlds can fit within me, but in this world I cannot fit
I am the placeless essence, but into existence I cannot fit
Both worlds fit into me I do not fit into both worlds (This world and the hereafter)
I am a placeless gem (essence) I don’t fit into the place
Throne and terrain, B and E all was understood in me (God said “be” and the universe was began)

End your words be silent I don’t fit into Descriptions and Expressions
The universe is my sine; the starting point of me goes to the essence
You know with this sign,that I don’t fit into the sign
With suspicion and impression, no one can grasp the truth
The one who knows the truth knows that I do not fit into suspicion and impression
Look at the form and the concept, Know inside the form that
I’m composed of body and soul but I don’t fit into body and soul.
Nasimi “Both worlds can fit within me…”
The poem serves as an excellent example of Nesîmî’s poetic brand of Hurufism in its mystical form. There is a contrast made between the physical and the spiritual worlds, which are seen to be ultimately united in the human being. As such, the human being is seen to partake of the same spiritual essence as God: the phrase lâ-mekân, or “the placeless”, in the second line is a Sufi term used for God. The same term, however, can be taken literally as meaning “without a place”, and so Neẓāmi is also using the term to refer to human physicality. In his poem, Nasimi’ stresses that understanding God is in the end not possible in this world, though it is nevertheless the duty of human beings to struggle for such an understanding.

Neẓāmi ‘s work represents an important stage in the development of poetry not only in the Azerbaijani vernacular language, but also in the Ottoman Divan poetry tradition. After his death, Neẓāmi ‘s work continued to exercise a great influence on many Turkic language poets, and authors.
Neẓāmi is venerated in the modern Republic of Azerbaijan, and one of the districts of the capital city, Baku, bears his name. An event dedicated to the 600th anniversary of Neẓāmi ‘s death was conducted in Paris, at the headquarter of UNESCO in May 2017. 2019 has been declared as the “Year of Nasimi” in Azerbaijan by President Ilham Aliyev devoted to the 650th anniversary of the birth of the poet.